IP fabric is one the network cluster configuration types in VMmanager allowing you to set up a cluster of virtual machines with public IP addresses on top of your organization’s private local network.

Important notice: IP fabric is only available in a cluster with nodes running on CentOS 8.

iBGP — dynamic routing protocol. This protocol manages exchange of routes between the nodes and the network equipment.

Node — the server where virtual machines are deployed.

Core Gateway — the core of the network, the main router of the segment.

Bird — the software enabling the work of iBGP protocol on Linux nodes.

Route reflector (RR) — the device that accepts routes from nodes and transmits them to Core Gateway via iBGP protocol.

Operating principle of iBGP in VMmanager 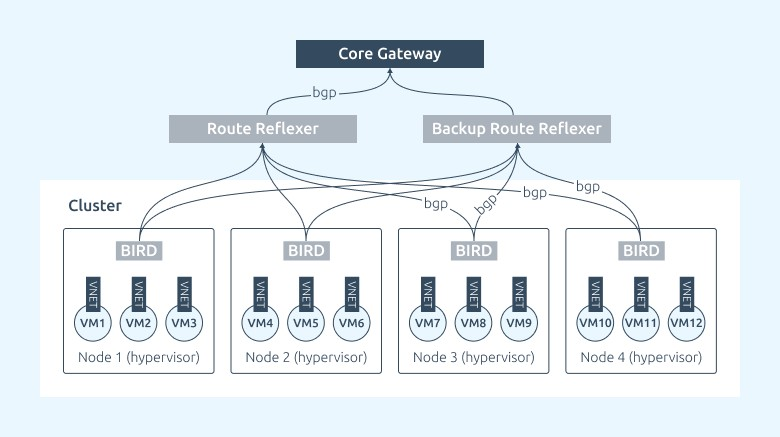 When a new virtual machine is created in VMmanager, the following processes are launched:

Important notice: Route Reflector does not participate in traffic routing, it is an "iBGP mediator" between the nodes and the Core Gateway. Thus, both physical servers and specialized equipment can be used as RRs.

Read more about IP fabric in the technical documentation

How to try IP fabric

This configuration option is primarily for testing purposes and is not recommended for use in production. RRs are not used in this configuration: routes from the node are announced directly to the router.

What is required for testing

High Availability cluster: what it is and how it works

The future of Russian IT: how the departure of foreign companies may affect expertise an
Igor Desyatnikov, ISPsystem Technical Director, shared his vision of the situation with CNews

The pain of choosing software: when it is better to create from scratch, and when - to buy a ready-made solution
General Director of ISPsystem shared his opinion with RSpectr on the advisability of buying software from a domestic vendor and in-house development