What is virtualization and where is it used

Virtualization is a technology that divides physical server resources among multiple users and applications. The best example to explain the idea of virtualization is an apartment building.

A country house owner has to take care of water and power supply, wood harvesting and organizing heating. Residents of the apartment building do not have to care about public utilities, because they provided by a city.

A server is a piece of equipment that hosts data. A physical server is like a country house. However, it is possible to make an apartment building from it — this is where you'll need virtualization.

With private servers, many people use the same physical server, but everyone has his own independent amount of computing resources. Therefore, different virtual servers hosted on the same physical server may have different operating systems, regardless of OS family. No matter what operating system your neighbor uses, you can use the one you want as if you'd have your own dedicated server.

Why do you need virtualization

Imagine an online store hosted on a dedicated server. The store itself requires only a few Gb of disk space, so the major part of computing resources is unused.

An owner of the online store decided to start sending emails with promo-codes for customers to raise sales. So, a mail server is required. It was launched on the same server with the store itself since it had resources available.

Two applications work on the same server with a common OS. The usage of computing resources is more efficient now, but these applications may affect each other.

The mailing was successful and hundreds of visitors flooded the online store and it went down. It caused the mail server crash as well. After this case, the website owner decided to host the website separately from the mail server. So they bought another server.

The website and mail server are hosted on different servers now. They do not affect each other, but most of both servers' resources are idle.

When the store needed to launch a CRM for employees, the owner decided to use virtualization instead of buying another server. The first server was divided into two virtual servers for hosting the website and mail server. Now they don't affect each other. The CRM system for employees was deployed on the second server.

The website and mail server work on the same physical server, but different virtual servers, so they don't affect each other. The second server hosts a resource-intensive CRM.

This is how virtualization can save computing resources and cut costs. .

How does virtualization work

A hypervisor is a special software for distributing these resources between virtual machines and isolating them from each other. The hypervisor is installed on the operating system or directly on the hardware.

The hypervisor is often called “a thin layer” between the host server and guest operating systems.

The hypervisor allows creating virtual machines and work with them same as with real physical servers. A virtual machine is very similar to a dedicated one. Some of the possible actions you can do with VPS:

KVM — is a hypervisor, built in Linux kernel. It is possible to use the console for managing KVM hypervisor, but it’s way easier if you’ll have a control panel with a graphical interface.

Where can the virtualization be used

Virtualization helps you to use your hardware more efficiently and solve business issues faster.

Creating a virtual server is much cheaper and easier than buying and deploying a physical server. The volume of computing resources may be configured for every VPS to fit the tasks it was created for. Even if you need to install different operating systems at every VM you host on one dedicated server — it is not a problem.

These advantages make virtualization incredibly popular. Virtual machines are suitable for a variety of tasks and can be used everywhere. 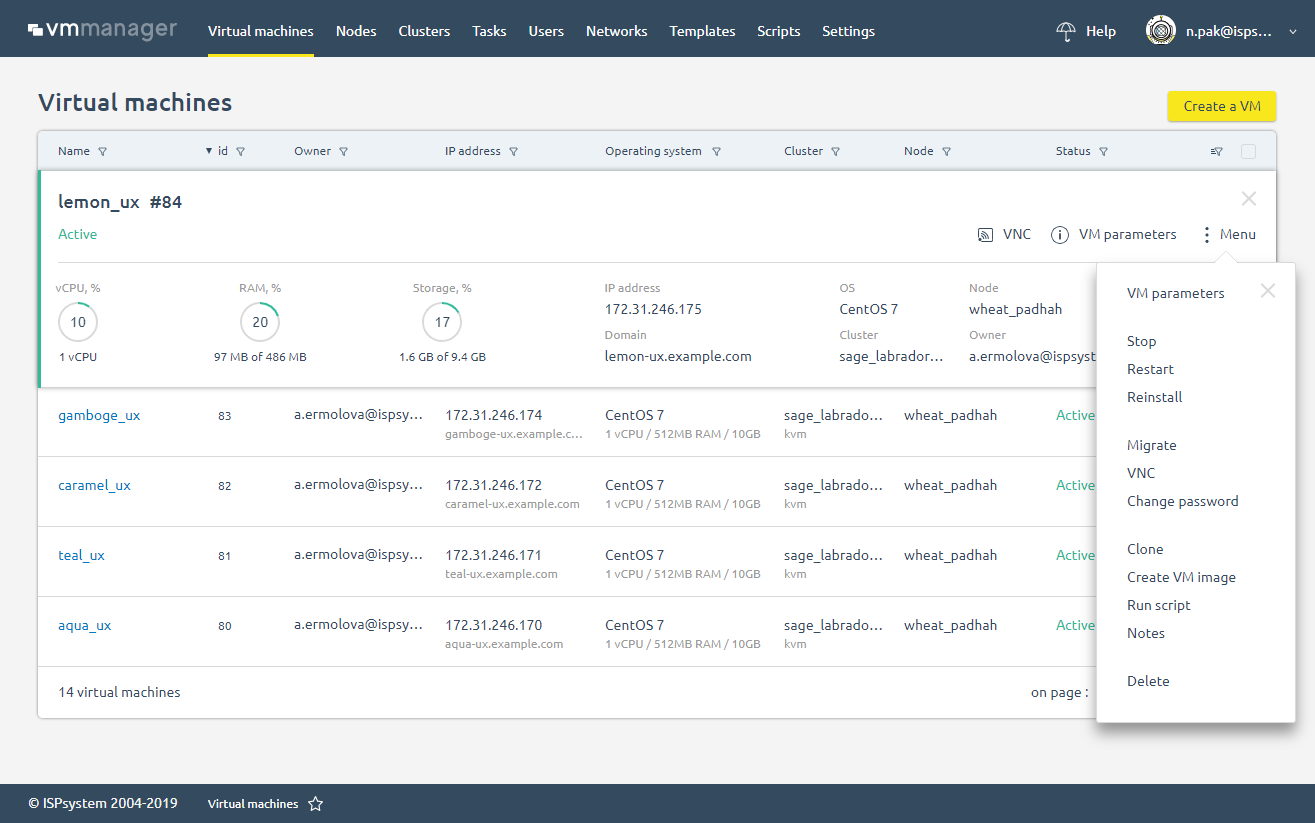 VMmanager makes virtualization technologies available to anyone. You can create virtual machines on Linux or Windows and resell them to your clients or use them for own needs.

Feel free to run the demo to evaluate the capabilities of VMmanager. If you want to test it on-premise, you may download and install it on your server. 30 days for free!

What is more profitable: colocation or own data center?
Efim Mirochnik - VP of Data Center Operations in Acronis has shared his experience